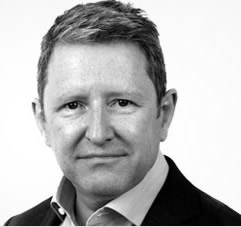 Simon is a media industry veteran, having worked as an advertising executive at Young & Rubicam and an Executive VP at both Walt Disney International TV and Warner Bros International TV, before becoming the President of Digital Distribution at Warner Bros in Los Angeles in 2006. He is currently CEO, Hoptroff London.

His experience covers all aspects of TV content distribution (including advertising barter), Satellite Channel development and operation, plus new digital models such as SVOD, YouTube MCNs and digital streaming platforms.

As President of Warner Bros Digital Distribution in Los Angeles (2006 -2008), he managed Warner’s transition to distribute studio content through new digital platforms such as iTunes, Xbox, IPTV, mobile and Netflix. Before taking up this post he was Executive Vice President of Warner Bros International TV Distribution for Europe, Middle East and Africa (2002 – 2006) managing distribution of all Warner Bros TV programming to broadcast networks, cable and satellite stations, and emerging digital services across the region (with a particular emphasis on Telecoms).

Previously, Simon worked for The Walt Disney Company (1992 – 2002) initially as Vice President of European TV Distribution. He was promoted to be responsible for the business development of the International Disney Channel roll-out in Europe in 1994, before moving to head up Disney’s Latin American TV distribution and channels business in Miami, as Senior Vice President in 1997. In 2000, he moved back to Europe to become the Executive VP of The Walt Disney Internet Group, Europe.

Most recently, Simon was Executive Vice President of Content and Strategy (2008) at the Internet video start-up, Babelgum, before joining Ravensbeck as a partner in 2010, where he now advises clients on content distribution and acquisition strategies and the integration of digital media distribution into physical/ broadcast distribution models.

Simon has experience as a Board Director in several major joint ventures such as: HBO Latin America, HBO Brazil, TVA (Brazil cable) and Canal Satellite Digital (Spain), and is a Director of Hoptroff London Limited (www.Hoptroff.com) who develop, design and manufacture the world’s most accurate wristwatches, including a range of atomic wristwatches that are accurate to one second every thousand years.